The Stokes County Arts Council will celebrate the music of Jazz legend Miles Davis on May 26 with a performance by Real Jazz and Bruce Mallatratt at The Arts Place of Stokes, 502 N. Main Street in Danbury. Davis, who died in 1991, would have turned 91 years old on May 26.

Miles Davis was an American jazz trumpeter, bandleader, and composer and among the most influential and acclaimed figures in the history of jazz and 20th century music. He adopted a variety of musical directions in his five-decade career, which kept him at the forefront of a number of major stylistic developments in jazz.

Real Jazz, originated and led by drummer Bruce Mallatratt, is becoming a fixture in North Carolina’s Triad area jazz scene, while helping to keep true jazz alive. The group’s blend of traditional straight ahead jazz, Latin jazz, funk and fusion sets it apart. The rich and captivating approach that is taken is accomplished by varying the tempos, genres, accompaniment during solos, the number of musicians playing at any given time, and the order of soloists. Joining Mallatratt will be former Prince band member Lynn Grisset on trumpet, Charlton Provatas on bass, and Kevin Timmons on piano.

In addition to selections by Miles Davis, a diverse repertoire from Real Jazz will also include pieces by Duke Ellington, Charlie Parker, Wes Montgomery, Freddie Hubbard, John Coltrane, Antonio Carlos Jobim, Chick Corea, Herbie Hancock, and Jeff Lorber. The uniqueness of the group will be further illustrated with hip original arrangements of popular tunes such as Eleanor Rigby by The Beatles and others.

The performance will begin at 8pm following a reception in the Apple Gallery for artist Ken Bridle from 5:30pm to 8pm. Tickets to the performance are $10 per person and can be reserved in advance by contacting the Stokes County Arts Council office at 336 593-8159. Tickets will also be available for purchase at the door. Higher Grounds Coffee Shop will be open during the celebration and the Stokes County Arts Council will be selling concessions. 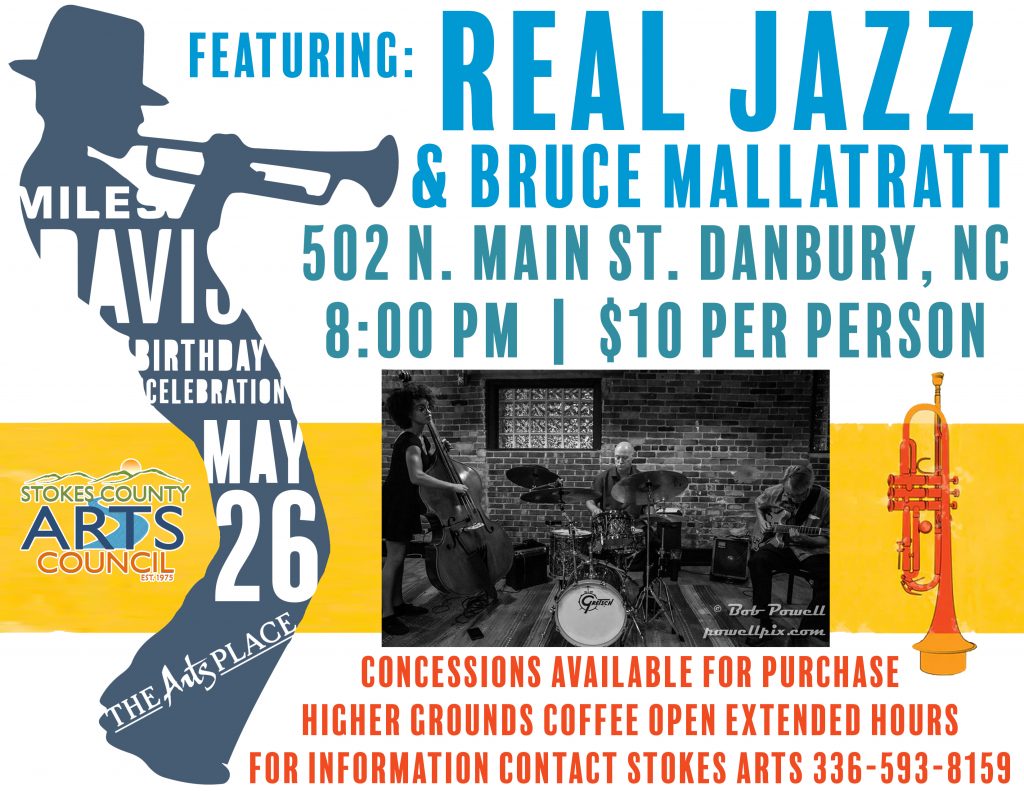