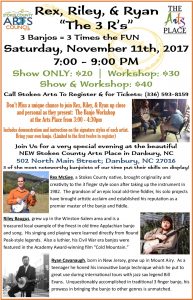 Don’t Miss a unique chance to join Rex, Riley, & Ryan up close and personal as they present: The Banjo Workshop at the Arts Place from 3:00 – 4:30pm
Includes demonstration and instruction on the signature styles of each artist.
Bring your own banjo. (Limited to the first twelve to register)

Rex McGee, a Stokes County native, brought originality and creativity to the 3 finger style soon after taking up the instrument in 1982. The grandson of an epic local old-time fiddler, his solo projects have brought artistic acclaim and established his reputation as a premier master of the banjo and fiddle.

Riley Baugus, grew up in the Winston-Salem area and is a treasured local example of the finest in old time Applachian banjo and song. His singing and playing were learned directly from Round
Peak-style legends. Also a Luthier, his Civil War era banjos were featured in the Academy Award-winning film “Cold Mountain.”

Ryan Cavanaugh, born in New Jersey, grew up in Mount Airy. As a teenager he honed his innovative banjo technique which he put to great use during international tours with jazz sax legend Bill Evans. Unquestionably accomplished in traditional 3 finger banjo, his prowess in bringing the banjo to other genres is unmatched.