The Ghost of Camp Saura 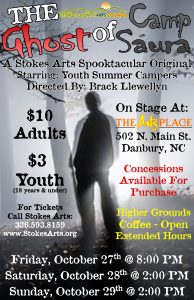 Things Get Spooky at “Camp Saura”

The one-act play, written and directed by Brack Llewellyn takes place at a fictional camp in the North Carolina mountains, where we meet Jack Welch (Django Burgess), a rising college freshman working a summer job as a camp counselor. It doesn’t take Jack long to learn that Camp Saura is more than a little weird. His fellow counselors include a brainiac named Wendy Blitzer (Riley Culler), who captures Jack’s heart immediately; and Alice Benton (Anika Burgess) a self-described “pantophobe” who’s afraid of just about everything. The chief counselor, Ivy Meldrick (Emily Grace Cox), is more drill sergeant than counselor.

Jack and Alice’s “summer of terror” is magnified by the campers they are assigned. They’re the toughest kids in the camp, known as “The Gophers” (Clayton Utt, Lee Bodenhamer, Byron Bullins, Caden Crawford, Eli Mabe, Emma Mabe, Kaylee DiJohn and Caroline Wagoner). The Gophers wreak havoc at Saura from day one, using their arsenal of live frogs, rubber snakes, wedgies and one of the girl Gophers’ super-strength. When the Gophers aren’t making the counselors’ lives miserable, they’re searching for the legendary “Chief Yahnahbee,” whose ghost has haunted Camp Saura for years.

Meanwhile, Jack, Wendy and Alice join forces to conjure up an otherworldly spirit of their own in an effort to frighten the Gophers into submission. His name is Jimmy Jordan, a counselor who got lost in the forest while looking for a stray camper. In the counselors’ story, Jimmy still walks the mountainside crying out in an eerie voice, especially when the campers are misbehaving.

The climax of “The Ghost of Camp Saura finds all the kids and counselors at the weekly campfire–a night of hot dogs, s’mores and, of course, ghost stories.
But which ghost will appear?

Performances of “The Ghost of Camp Saura” are Friday October 27th at 8:00pm, Saturday October 28th at 2:00pm and Sunday October 29th at 2:00pm. The play runs approximately 50 minutes and is suitable for kids. Tickets are $10 for adults, and $3 for students.

To purchase tickets in advance, contact the Stokes County Arts Council at 336-593-8159.

Please post the flyer at your favorite community spot