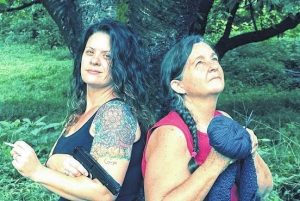 “A Dangerous Woman” Scheduled for The Arts Place of Stokes

Local playwright Frank Levering enjoys nothing more than prompting his actors and the audience to think and feel when experiencing his plays.  His latest work, “A Dangerous Woman” will do just that when it opens in Stokes County for one performance only on Sunday, November 5 at 3pm at The Arts Place, 502 N. Main Street in Danbury.

“The play is a story about two women whose friendship has been severely tested” said Levering.  “In sixty minutes the story depicts betrayal, doubt, healing, and reconciliation.” There are also darker elements of domestic abuse and potential suicide.  It’s a very challenging piece, but these two beautiful women more than live up to the challenge,” Levering added.

The two women that Levering speaks of are Thelma Jean Pack, who plays the character of a mature Lorene, and Rose Warshana, who plays the part of a deeply disturbed Carrie.  The background for the play is their history of working together in a small textile mill located in a deeply religious community. In the 1990’s, many small North Carolina communities lost tens of thousands of jobs in its textile mills.  Along with the loss of income, mill workers lost a way of life, and some will say their bearings.   Many of these workers were women.  Day after day, year after year, women who sewed, operated machines, and met quotas arrived at the mill and did what it took to keep their jobs.  Then, it was over.  In some cases, jobs that didn’t pay all that well, but were nonetheless meaningful, migrated to more profitable corners of the globe.  As friendship in a man’s world has often been a lifeline, and solace, for women, the play drives into that experience, much as one might drive into the parking lot of one of those textile mills, get out of their car, and wonder, where am I?  Who are these people?  Is it safe being here?

The play’s subject matter is considered PG-13 with mild profanity.  After the play, the director and cast will welcome questions from the audience.

Admission is $10 per person with only one hundred tickets being sold.  Contact the Stokes County Arts Council at 336 593-8159 to reserve tickets or for more information.  All net proceeds from the play will be contributed in support of the Stokes Family Violence Program.